Update: The images group this post mentions is technically not necessary and is really just for organization as Xcode puts the physical file at the root. Within MonoDevelop however, including a folder called images will be persisted (which is why this didn’t work when I tried it from MonoDevelop). To make it work from MonoDevelop, simply include the Default.png in the root of your project and give it a Build Action of Content. Thanks to Michael Hutchinson for clarifying this.

Many iphone apps display a startup image when loading rather than an empty black screen. In Xcode this works by having a file named Default.png in an Images group. I couldn’t find a way to do this directly in MonoDevelop yet, but since MonoDevelop supports emitting an Xcode project, we can use this to take advantage of any features that Xcode offers, such as this.

First, in MonoDevelop select Debug in Xcode. This will create an Xcode project under the Debug directory. 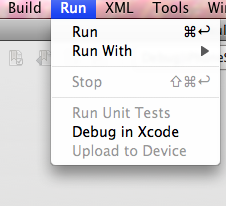 Next, open the Xcode project and add a new group called Images.

After this simply add an image file named Default.png. 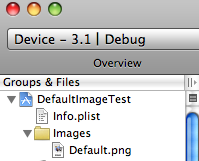 I tested this on the device and it worked well. If anyone knows a way to do this directly from MonoDevelop please let me know.